The flag of Alberta, Canada was adopted on 1 June 1968.
The flag has the proportions 2:1, with the provincial shield of arms in the centre. The shield's height is 7/11 that of the flag's height.

The provincial colours, adopted in 1984, are blue and gold (deep yellow); they are also referred to as ‘Alberta blue’ and ‘Alberta gold,’ appearing on the flag/shield in the sky/background and wheat background, respectively. 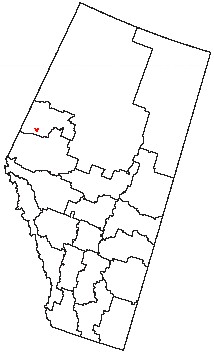 A locator maps indicating the location of Grande Prairie within Alberta and a large map of Alberta can be found below.